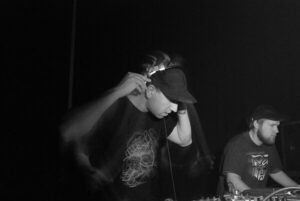 Atiq & EnK formed in 2007 by Guido Van Den Brink and Pim Arnoldus in the Netherlands. Where Pim comes from a metal background before dwelling in the electronic music realm, Guido made his start in event promotion in Rotterdam during the first decade of the new millennium. In 2007 Guido started his own record label Mindtrick Records releasing such artists as Mobthrow, Semiomime (DJ Hidden), Delete, and most recently Tangent . Both Pim and Guido collectively developed a love for electronic music, initially in the breakcore and jungle genres, but quickly found their niche within more cerebral, complex sound design, inevitably resulting in the formation of Atiq & EnK. Their new union created a captivating fusion of breakbeat, dubstep, trip-hop, classical, and electronica with ambient melodies and strong, broken beats. As a result, their debut album ‘Fear of the Unknown‘ was fully realized and found it’s way onto Tympanik Audio’s doorstep. 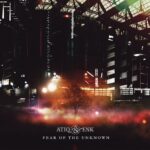 Led by heavy wobbly basslines and pulsing synth pads, ‘Fear of the Unknown‘ exhibits a dark yet airy approach to beat-driven electronic music, injecting each song with an unmistakable groove and flow. Striking atmospheric breakdowns facilitate transitions among the infectious beat movements, while subtle glitches and echoing snares accentuate the overall flow of each song. Sometimes brooding, sometimes wondrous, Atiq & EnK‘s ‘Fear of the Unknown‘ manages to hold the listener’s attention throughout with a steady and cohesive tapestry of expansive beatwork, contorted melodies, and enveloping atmospheres that all seem effortless and natural to these talented new Dutch sound designers. A remarkable and impressive debut, ‘Fear of the Unknown‘ burrows deep into the subconscious and ascends into an unknown inner universe. Are you afraid of the unknown, or will you embrace it?

Atiq & EnK‘s ‘Fear of the Unknown‘ is available now on CD, vinyl, and digital formats featuring artwork by shift., only from Tympanik Audio and Mindtrick Records. Order CD and digital here.