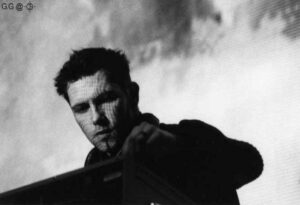 Flint Glass is a Paris-based dark electronica project that has been described by critics as representing some of the most innovative sounds-styling towards electronica, rhythmic noise and dark ambient genres. Flint Glass is a one man project of Gwenn Trémorin, formed in 1999. Not only a musician and producer, Gwenn also manages the outstanding experimental electronica label Brume Records in France.

The Flint Glass sound tends to crawl under your skin, shapes the most fantastic images, and keeps challenging by means of an intelligent use of samples, rhythms and beats. With Flint Glass you find influences from the ambient of the ‘90’s as well as various forms of IDM, tribal and industrial rhythmic noise. Flint Glass has played numerous live gigs all around Europe, festivals and at some famous clubs like Batofar/Paris, Dom/Moscow, Slime light/London, Kab Usine/Geneva, Ajm Club/Monaco, and his project already appears in the foreground of finest experimental electronica.

After two critically-acclaimed full-length albums for Brume Records and the abrasive collaboration with Telepherique in 2007 on Montreal’s Angle.Rec label, Flint Glass now offers up his very best remix work for such acts as Thermidor, Suicide Inside, Empusae, Polygon, Eretsua, Zonk’t, Shizuka, Prospero, Sci Fi Industries, Displacer, HIV+, Disharmony, Tzolk’in, and OTX; all compiled into one stunning anthology of music.

“…a natural winner. This remix album is not to be missed.” – Connexion Bizarre

“…if more projects would deliver such remixes I would be the happiest man in the world.” – Reflections Of Darkness

In the works: Gwenn is working on his new studio album but in the meantime a fantastic new track from Flint Glass on Tympanik Audio‘s DCD compilation release ‘Emerging Organisms 2‘ + remixes for Zentriert ins Antlitz and Totakeke.