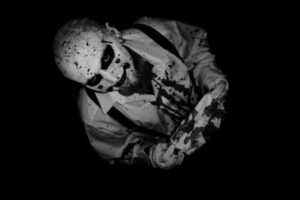 From the cold landscapes of Alaska comes a talented new artist by the name of Lucidstatic. With his prolific blend of glitch, breakcore, industrial, and idm, Lucidstatic is by no means an imitator, but rather an innovator of the hard electronic sound.

With an impressive dossier of remixing and collaboration credits, including Unter Null, Otto Von Schirach, Diverje, Autoclav1.1, Zentriert ins Antlitz, Displacer, Totakeke, and many others, Lucidstatic lays claim to his rightful place in the Powernoise ranks among such artists as Pneumatic Detach, Edgey, and Genetic Selection. Along with his downtempo alter ego Pandora’s Black Book, Lucidstatic manages to maintain his own style, effortlessly fusing addictive rhythms with slicing beatwork and thought-provoking samples to create sonic compositions that will grab the listener firmly by the tympanic membranes.

Available now on Tympanik Audio is Lucidstatic‘s fiery debut album titled ‘Gravedigger‘. A fierce hybrid of Breakcore, Powernoise, and classic Industrial elements, Lucidstatic is by no means an imitator, but rather an innovator of the hard electronic sound. With his official debut CD ‘Gravedigger’, Lucidstatic effortlessly fuses addictive rhythms with razor-sharp beatwork and powerful, abrasive noise collages to create a sonic hurricane of brutal compositions that will seize you firmly by the eardrums and leave you gasping for air. 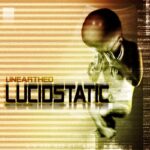 Released on Tympanik Audio in June 2009 is the inevitable remix collection from the ‘Gravedigger’ sessions titled ‘Unearthed’. Available as a digital-only download album from Tympanikaudio.com, ‘Unearthed’ features fantastic remix collaborations by such artists as SE, Copy Paste Repeat, Pig Fat, Displacer, Human Error, Tapage, Mono Penguin, Unterm Rad, Ghost In The Clocktower, and can be ordered right here for a mere $5. 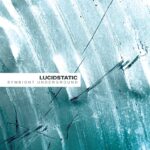 Out now is Lucidstatic‘s new album ‘Symbiont Underground‘ on 2CD from Tympanik Audio. Initially working from a vast collection of unfinished material, Lucidstatic approached and was approached by a talented cast of both up-and-coming and well-established artists. Piece by piece, track by track, each selection for ‘Symbiont Underground‘ was poured over, polished, and perfected until the collective results swelled beyond the expectations of its creators.

In the works: Lucidstatic continues to crank out new tracks and collaborates with a multitude of promising new artists. His remixes have been featured on recent and upcoming releases and his tracks continue to appear on numerous radio, webcast, and DJ club playlists. His side-project Pandora’s Black Book has released a new album titled ‘Black Brothel‘ on Tympanik Audio which is already receiving rave reviews from the press.

Haujobb
Haujobb is Daniel Myer (Architect, Destroid, Covenant)
021
Flint Glass
Biography_ Flint Glass is a Paris-based dark electronica
00
Fractional
Belgium-based Fractional describes his music as “Gothic
09
Displacer
With three ground-breaking albums in 3 years for the
05
EyeScream
EyeScream is the project of Andrey Novikov from Saint-Petersburg, Russia.
04
Comaduster
Comaduster is the solo electronic project of the Canadian
014
C.DB.SN
c.db.sn weaves a stirring emotional experience in to
03