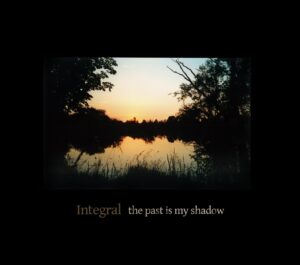 In 2008, Tympanik Audio introduced our listeners to Integral, an esoteric duo from Germany, and their debut album ‘Rise’. With a very personal approach to a wide range of multi-layered and hauntingly beautiful compositions, ‘Rise’ proved to be a gem in the Tympanik catalog and a highly appreciated aural experience for its listeners.

As we all waited patiently for a new album, Integral began sifting through their minds and hard drives seeking the origins of their creativity. The results of that search took on the title of ‘The Past Is My Shadow’, eighteen unreleased and newly mastered songs that expertly construct the foundation for what would eventually become the Integral we know and admire today.

From their earliest beginnings, David and Rafael seemed to have a firm grasp on the tone and direction they wanted for Integral. Songs originating from as early as 2002 up until post-‘Rise’ 2006 manage to sound as bright and purposeful as if they were just recently produced. Each selection on ‘The Past Is My Shadow’ reveals a rich collage of sounds and ideas, with a level of depth and intricacy that is uncommon these days. Beat-driven and rhythmic, but never overpowering, with vast swirling ambiance, layer upon layer of dense atmospheres, poignant melodies, and a smooth complexity that allows the listener to uncover new levels of aura with each ensuing listen.

In David and Rafael’s own words, “For us, this is the real debut album… a release of the past and an opening for the future. We invite you to take a journey with this album and find your own place somewhere in this universe of sound.”

A universe of sound indeed. Get ready. Integral’s ‘The Past Is My Shadow’ is available now in a 2-CD collection from Tympanik Audio. Limited to 500 copies.