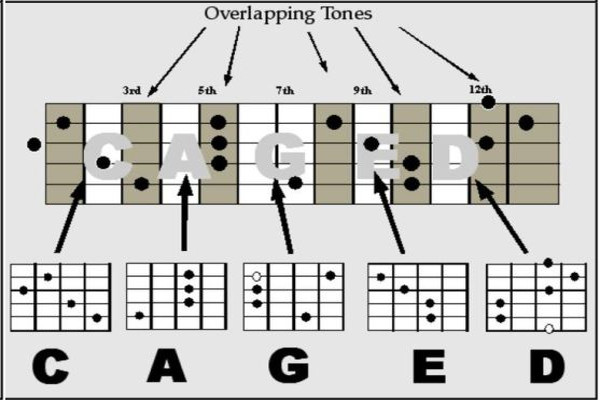 This pack will teach you chord shapes that you can use on any fret of the guitar. Give it a go! The pack includes the following items:

Wouldn’t it be amazing if someone could develop guitar lessons where you can easily see and play the whole fretboard? The CAGED system is an example of this. The fretboard is simple to read because it’s divided into different shapes. You can see chords and scales all over the guitar.

Simplifying the Fretboard with the CAGED System

The guitar is shaped like a grid with all the notes on it, unlike a paper keyboard. This can make it tough to learn the note placement. You’ll have to memorize where each one is and how they connect to each other.

So we need to find something to help us visualize the fretboard in a way that’s simple and easy-to-use. This is where the CAGED system comes in.

How the CAGED System Works

The CAGED system divides the guitar neck into five sections and shows how different open chords relate to the notes on your guitar. The system makes it simpler to navigate the fretboard.

Once you understand the guitar fretboard, it becomes really easy to know where specific strings are on your guitar. And not only that, but it’s a lot easier to find related patterns too.

Let’s take a look at the chords that shape the CAGED system.

Chords of the CAGED System

CAGED is a guitar theory system based on five basic open chord shapes:

Each open chord form is moveable – this means that they can be played in different locations, up and down the fretboard. This is done by barring the notes (places) where they fall on the same fret.

Barre chords have a similar shape as some of the open chords you already know, such as the E and A shapes.

But first, let’s look at open position of each shape and finish by seeing where they can move up and down the fretboard.

The open chords are the building blocks of the CAGED system.

Each system is based on these shapes. The shapes are moveable up and down the neck.

Let’s explore how chords can be formed by these notes.

If you move an open C chord up 2 frets, it becomes a C-form D chord. As this is not in an open position and requires barre across strings 1, 2, and 3.

This is a very basic chord. To make it an octave higher, all you need to do is move the whole shape up one fret.

If you move the G chord shape up to the 6th fret it’ll form a G-form B flat chord. Note that fretting this note will be a bit tough but sometimes necessary on some guitars. It’s also common to just leave this string unfretted.

Move the E chord shape up to fret 2 and you have an F barre chord.

If you apply the concept of moveable chord shapes to a single chord it will be where you get to see how useful the CAGED system is. This is what maps out the fretboard in a logical way because chords can be played anywhere on the fretboard.

Each chord shape connects to the previous following a set pattern, CAGED:

For example, C chords are usually in the middle of the floor. Follow this chord up the fretboard and it will come together!

In this first diagram, we have the C chord in its natural open C form.

The bottom note of the 5th string is also the root note for the A chord. Notice how it also connects to the A chord in this diagram. You can see an example of this A form C chord below.

The 5th, root, and major 3rd on the 4th, 3rd, and 2nd strings respectively form the upper part of the G chord. This connects to an A form C chord and then a G form C chord.

The root of the 6th string in the G form chord is shared with the E form CAGED shape, so naturally it connects the two chords. Below there’s an example of how to play an E form barre chord with the root on 8th fret.

When we take the root note on the 4th string of the E chord, we can find where this corresponds with notes in D form. This can then be used to create a progression of chords between them

The D chord then connects to the C form chord with a 5th, root, and major 3rd on the third, second, and first strings respectively.

In the following diagrams you can see how the CAGED chords work across the entire fretboard. These chord shapes apply to any root note – such as a D major chord in this case. The diagram of that particular area can be seen below:

Once you have a good understanding of the chord shapes in the open position, it’s important to find out all the root notes for each one. Each chord has its own root note shape which makes it very distinctive. Think of these as your “anchor points” that help you find the other shapes in the chords across the neck.

You may not know it, but the CAGED system can also be used to create chord shapes from major scales and arpeggios. The reason for this is pretty logical: chords are made from scales so it make sense that you can use the same system.

This diagram below shows you the major arpeggio and scale pattern for each of the CAGED chords. One important note to the CAGED system. It can be used to learn minor scales and chords too.

Learning guitar fretboards can be difficult without a solid strategy. Using learning methods that use shapes to determine intervals will help you learn the fretboard more quickly. The CAGED chord system is great and allows us to easily write music with non-standard scales and chords. Using this, we can play in any position on the neck based on some chords and scales that might be familiar to us.

What is the CAGED system?

The CAGED system is a guitar chord learning technique that uses five movable chords to construct any major or minor chord. It was first introduced in the 1950s. The five chords are: C, A, G, E and D. These letters stand for the open strings on the guitar.

Who invented the CAGED system?

The CAGED system was invented by guitarists to help them learn the fretboard. The system is based on five main chords, and these chords are arranged in an order that follows the pattern of the letters in CAGED.

Jimi Hendrix, Eric Clapton, and Slash are just a few of the many guitarists that have used the CAGED system to become successful musicians.

What are the benefits of learning the CAGED system?

The CAGED system is a technique that helps guitarists learn chords, scales and arpeggios more easily and quickly. It uses five shapes for the major chord family that can be moved around the fretboard in different ways to play different chords.

There are many benefits of learning the CAGED system:

Why is it important to learn CAGED system?

CAGED system is a guitar chord system that can be applied to other instruments as well. It is an easy way to learn chords on the guitar.

This system has 5 main chord shapes and 5 inversions of these shapes. One of the benefits of learning CAGED system is that it makes it easier to switch between chords because they are all in the same order.

It also helps you get a better understanding of note patterns and intervals on the fretboard.

Is it possible to play in different keys with the CAGED system?

Is the CAGED System a beginner or advanced guitar system?

The CAGED system is a beginner guitar system.

This is because it teaches the most basic chords in the guitar and it’s very easy for beginners to learn.