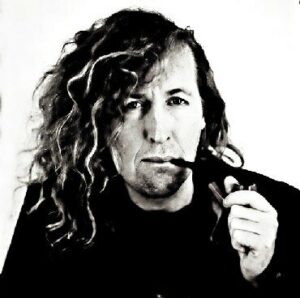 David Thrussell is a poet trapped in the body of a hillbilly, or a hopeless romantic hidden in the twisted frame of a dark electronic musician. Late at night Thrussell fantasises that he actually lives next door to Hieronymous Bosch in Medieval Europe and has hallucinated the whole dreadful modern era while suffering from acute ergot poisoning. We are not entirely convinced that this is not the case.

The world knows him (if it knows him at all), as the creator of a seeming multitude of obscure recordings (Snog, Black Lung, and Soma amongst others) and film scores (‘The Hard Word’, ‘Thunderstruck’ etc). It may or may not soon know him as an author of unhinged children’s tales for a particularly depraved kind of adult.

He lives on the dark slope of a forgotten mountain and was last seen having an animated conversation with some rocks and a shrub. He is, to be frank, an odd little man.

For our sake, if for no other reason, please humour him. 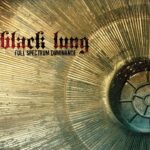 You will find, for your consideration only, a new electronic work by Black Lung titled ‘Full Spectrum Dominance‘ on 6-panel digipak CD this June, presented by Ant-Zen in Europe and Tympanik Audio in North America.

Now all you have to do is wait…

Haujobb
Haujobb is Daniel Myer (Architect, Destroid, Covenant)
024
Flint Glass
Biography_ Flint Glass is a Paris-based dark electronica
01
Fractional
Belgium-based Fractional describes his music as “Gothic
09
Displacer
With three ground-breaking albums in 3 years for the
05
EyeScream
EyeScream is the project of Andrey Novikov from Saint-Petersburg, Russia.
05
Comaduster
Comaduster is the solo electronic project of the Canadian
014