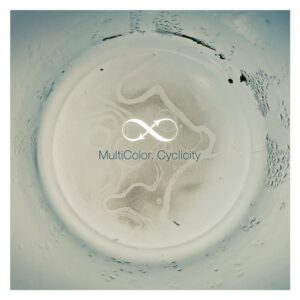 MultiColor was created by Russian musician Anton Guskov to represent the multitude of influences that ultimately shaped his sounds and ideas and as a result the first EP ‘Cyclicity‘ was complete, representing a thoughtful projection of Anton’s inner world.

With ‘Cyclicity‘, MultiColor‘s deliberate placement of sounds open an auditory field that not only creates an impression of space, but contracts and expands with a blend of glitch and guitar motifs over deep rhythms and warm undertones. A truly three-dimensional sound that brings to mind a radio broadcast from a sinking submarine. Bubbles rise up though the murky water and break at the surface, as the craft disappears into the deep. Once or twice, the sounds threaten of something more sinister, but never takes you there. The effect is to draw you further in… and lead you into the untapped regions of your subconscious, all the while maintaining an addictive underlying beat that never fails you.

“…I am immediately impressed. MultiColor creates a hybrid of IDM/ambient/glitch which reminds me of the classic acts who got me into the genre – stuff like Boards of Canada, Plaid, Mouse on Mars, etc. …MultiColor stands out from the pack.” – Wounds of the Earth

“It’s IDM with a mild technoid bent and a ridiculous amount of attention to the small details that differentiate it from other purveyors of the style, at 4 songs it’s just a taster, but there’s certainly reason to believe Multicolor will translate to a larger canvas with ease.” – I Die: You Die