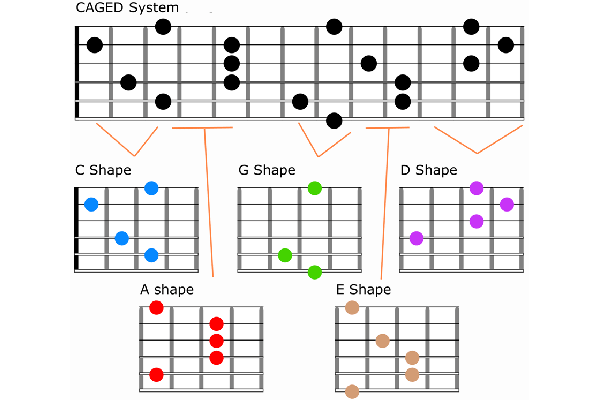 What if there were a guitar system that would allow you to easily visualize and connect the fretboard up and down the neck? The CAGED system does just that – it lays the fretboard out in a logical fashion, meaning you can easily see different chord shapes and scale patterns.

Simplifying the Fretboard with the CAGED System

The guitar has a note grid. It differs from a piano in the sense that it’s not a linear layout but instead, one that covers the entire instrument and thus requires more intuition to remember how the notes go together.

The CAGED chord system is a way to visualize the fretboard in an easy-to-use and simple way.

How the CAGED System Works

The CAGED system maps out the fretboard so you can see the 5 different chord shapes and how they relate to each other. It’s an easy way to see patterns and relationships as well as helps simplify the guitar neck.

Once you recognize this connection, the guitar’s fretboard becomes a whole new landscape. You can see it as clear shapes and patterns that can be individually identified.

Let’s focus on what chords make up the CAGED system.

Chords of the CAGED System

The first step in understanding the CAGED system is learning what each letter stands for:

Open chords have different shapes that can be easily moved up and down the fretboard. This is just done by putting a bar (or any finger) across all of the frets where there’s an open chord that touches on your chord shape.

If you’re having any trouble playing these chords, don’t forget to check out the beginning of the diagram in more detail.

If you’re not feeling up for the challenge of learning all seven shapes, this article has a great way of simplifying things by looking at the shapes in their open form before moving them up &amp; down the fretboard.

The open chords are the building blocks for the CAGED system.

The whole system is based on these shapes, because these shapes can be moved up and down the neck.

Here’s a quick example of how you can go about to form chords in other keys.

In order to play the C-form D-chord, you need to move the open C chord up 2 frets. This makes it more difficult to play so you will need to barre across string 1, 2, and 3.

When you move the open A chord shape up to the 2rd fret, it changes into a B chord.

One way to make an F chord is move your E chord shape up to the 2nd fret.

Move the open D chord up three frets and you’ll get a D-form F.

The usefulness of the CAGED system really comes thru once you realize that one shape can represent chords with different root notes. A fretboard map arranges everything in a logical way. That’s because any given chord can be played all over the fretboard if you break it down into its four shapes.

A chord shape follows a set pattern called CAGED, which means that it connects to the previous chord following this pattern:

Let’s move up the fretboard to understand how this chord is built.

For example, in this first diagram, we can see the C chord in its natural open form.

The 5th, root, and major 3rd are all found on the 4th, 3rd, and 2nd strings respectively. When combined they form an upper part of a G form chord that connects the A of C chords.

The root of the 6th chord on the G guitar form is shared with the E bars, connecting them. Below, you can see a familiar E form C bars and its root on 8th fret.

The root on the 4th string is a G sharp, so because the E form chord is an A minor, it’s in close proximity to the D form chord which is a C major. The natural E can be found in between them.

The ‘D’ shape note connects back to the ‘C’ shape chord via the 5th, root, and major 3rd on the 3rd, 2nd and 1st string respectively.

In these diagrams we can see how different CAGED chord forms are interconnected all over the guitar lick. The same applies to any root note. Here is a diagram that shows you all the D major chords across the fretboard – using CAGED as a reference.

After getting used to the CAGED chords, it’ll be very important for you to pay attention to the root notes in your chord shapes. All the different chords have their own kind of shape that helps you tell them apart. The root notes act as the anchor points so you can find the chord shapes across the neck.

The CAGED system can be pretty useful when it comes to writing chords and arpeggios. It also applies to major and even scales. This diagram can help you find the major arpeggios and scales for each of the CAGED chord shapes.

One important note to this lesson. While this particular lesson focuses on the major scale/chord, your knowledge will also be applied to minor chords and scales.

To best master the guitar fretboard, it’s important to have patterns and shapes that allow you to easily see the layout of intervals. The CAGED system does this for us. Working on the CAGED system will help you be able to see the entire fretboard at once and play in any position. You just need to learn a few chords and you’ll never have problems knowing where you are on the neck if a song goes into an unfamiliar key.

What is the CAGED System?

The CAGED System is a guitar-specific technique for learning the fretboard. The CAGED system was developed by guitarist and teacher, Ted Greene. It was originally used as an easy way to learn scales on the guitar and it has since been adapted to many other instruments including bass, banjo, mandolin, violin and viola.

This theory system is based on five open position chord shapes, each containing at least one string that crosses over another string. These five shapes are then used to represent all 12 notes of the chromatic scale.

The CAGED system divides the fretboard into five areas, each with a letter name: C, A, G, E and D. The letters represent chord shapes that can be moved up or down the neck. For example, if you want to play an F major chord shape on one string you would use your index finger for an A string fret and your ring finger for a D string fret.

What are the benefits of using CAGED Guitar Theory System?

Tom Ferrell. The system can be used to teach beginning guitar players how to play chords in different keys and positions on the guitar neck. It also helps in understanding chord construction, reading music notation and transposition.

What are the drawbacks of using CAGED Guitar Theory System?

The main drawbacks of using this system are that it does not cover all of the chords and scales, and that it can be difficult to memorize because there are so many different shapes to learn.

CAGED Guitar Theory System is a guitar theory system that is used to teach guitar players the different chords that can be played on the guitar.

The CAGED system has five basic chord shapes that are rearranged to form all other chords and scales. The five shapes are C, A, G, E and D. These letters represent the first letter of each chord shape from lowest string to highest string.

How do I use the CAGED Guitar Theory System?

The CAGED system divides the guitar fretboard into five sets of open strings that are each assigned a letter name: C, A, G, E, D. The chords for each set are built by playing the notes on two or more strings at once. For example, to form an A chord you would play the open A string together with the fifth fret on the D string.

This system can be used to find any chord quickly and easily as long as you know which string set it belongs to and what notes make up that chord.