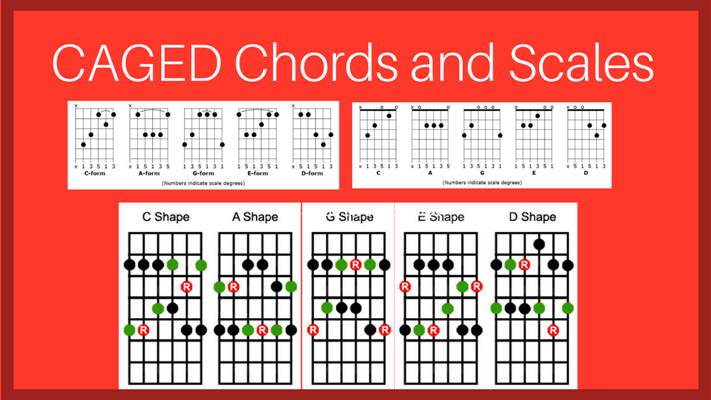 The Caged system lays out the fingerboard of the guitar in an easier to understand manner. This guide shows you chords, scales and arpeggios for every major “Cage” shape on the neck. For more information about the CAGED system.

If you’re a veteran guitarist, you’ve probably heard of the CAGED system. Basically, it links scales to chords in 5 shapes – CAGED (C, A, G, E, and D). This is a clever way of memorizing the scales for each chord. There are many other ways to learn chords and scales, so I wouldn’t say that CAGED is the only way. I don’t use it for scales much because I think it’s especially helpful in the beginning, but you should try different.

In this article I introduce the CAGED system, and expand it to include arpeggios. My version might be better called the CAGE system because it does not bother with learning the chord D and its corresponding chord shape associated with each “C” note in the scale.

Though the D chord is not as relevant for me, I did manage to include scales, arpeggios, chords in my 1 page sheet, and wasn’t able to fit in the D chord (of course I’m not saying you shouldn’t learn the open position D chord, because it’s found in lots of songs. I’m just eliminating it from the chords because I dont see as much use for it. The scale that corresponds to the open position D chord isn’t as useful, in my opinion.

The CAGE system, just like the similar CAGED system, starts with four of the most common open position chords: C, A, G and E. Most guitar players learn this when they start playing. The roots and fifths are on the picture. The red squares are the roots and the dotted black squares represent fifths.

A major chord is built from the letter name of the root and getting the note four half-steps higher (the third (); then add one more three half-steps higher than the second note. It looks like you might want to take a look at this article that I’ve just linked to. Here are a few modifications of open chords so they can also be played as barre chords.

This is where we start to see how these barre chords are really not so different from their open position counterparts. The A-type and E-type barre chords (so named because they’re derived from the A and E open position chords) are by far the most commonly used types. The C is less common but still useful, while G is rarely used because it requires a rather awkward stretch.

The image below shows which strings can be strummed, and where the barre is used across six or three strings. (The barred strings are the ones with a curved line above them.) Every chord also has three different chords in it.

We just covered chords in CAGE, and next we’re going to focus on arpeggios. In an arpeggio, the notes of a chord are played one after the other, not all at once. These chords will look like the lot shown above with a few extras at the end. This is because we usually play all of the available notes of one chord.

In music, we often find two different notes on the same string (sometimes more for other kinds of arpeggios). The chords C, A, G, and E are called triads because they include only three different letter names. For example, if you’re playing a C chord you’ll have to play an ‘C’.

When playing an arpeggio of a C chord, usually the full range of all available notes is played consecutively, sometimes spanning less than an octave (7 consecutive letter names).

The following chord arpeggios correspond to the C, A, G, and E. Keep in mind that there are various fingerings for these and some are easier than others. Notice that I have labeled any roots, thirds and fifths using the same symbols as the chords above.

If you work it out you’ll find that these arpeggios contain the chords C, A, G, and E. CAGE is such an intuitive system since it has chord forms that are the same as the arpeggios. However, there are many other kinds of arpeggios, so keep in mind that not all of them will come naturally.

Scales are a really cool concept and are used to establish scales using sets of consecutive letter names. One example of this is a major scale, which is always made out of consecutive letter names, with the pattern 2212221. This means that numbers signify the distance in half steps between notes. Essentially, the notes are two half-steps apart from each other. For example, the first note is two half-steps away from the second note and so on.

Below is a chart of the patterns for matching chords to their arpeggios, for C, A, G, and E chords. It’s a little tricky to spot the C, A, G, and E chords in these scale diagrams so I’ve coloured them red. I used white for the root (tonic) and black for the other notes.

The scales are movable too and can go higher or lower down the fretboard depending on what white keys you’re playing. If you move the C scale up the neck (higher in pitch) so that the white circles end up on D’s (the white circles in each scale are always the same letter name), the scale becomes a D major scale. Of course, the chords and arpeggios in this section will demonstrate.

What is the CAGED system?

The CAGED system is a guitar chord learning technique that uses five movable chords to construct any major or minor chord. It was first introduced in the 1950s. The five chords are: C, A, G, E and D. These letters stand for the open strings on the guitar.

What are major chord, arpeggio and scale shapes?

A chord is a set of three or more notes played at the same time. A major chord consists of a root note, the 3rd and 5th notes of the scale.

An arpeggio is a type of chord in which only one note from the chord is played at a time, usually beginning with the lowest note and progressing up to the highest note.

A scale shape refers to any pattern that can be used to form chords or arpeggios on a guitar fretboard.

Who invented the CAGED system?

The CAGED system was invented by guitarists to help them learn the fretboard. The system is based on five main chords, and these chords are arranged in an order that follows the pattern of the letters in CAGED.

Jimi Hendrix, Eric Clapton, and Slash are just a few of the many guitarists that have used the CAGED system to become successful musicians.

What are the benefits of learning the CAGED system?

The CAGED system is a technique that helps guitarists learn chords, scales and arpeggios more easily and quickly. It uses five shapes for the major chord family that can be moved around the fretboard in different ways to play different chords.

There are many benefits of learning the CAGED system:

Why is it important to learn CAGED system?

CAGED system is a guitar chord system that can be applied to other instruments as well. It is an easy way to learn chords on the guitar.

This system has 5 main chord shapes and 5 inversions of these shapes. One of the benefits of learning CAGED system is that it makes it easier to switch between chords because they are all in the same order.

It also helps you get a better understanding of note patterns and intervals on the fretboard.

How can I use the CAGED system to learn any major chord, arpeggio or scale shape?

The CAGED system is a chord shape system that can be used to learn any major chord, arpeggio or scale shape. It uses five shapes for the major chords, which are derived from the five open strings on the guitar. The acronym stands for “C” (C-shape), “A” (A-shape), “G” (G-shape), “E” (E-shape) and “D” (D-shape).

The first step in using the CAGED system is to find the root note of your desired chord, arpeggio or scale shape. Once you have found this note, you will then need to find which one of these five shapes it falls under – either A-shape, G-shape, E-shape or D-shaped.