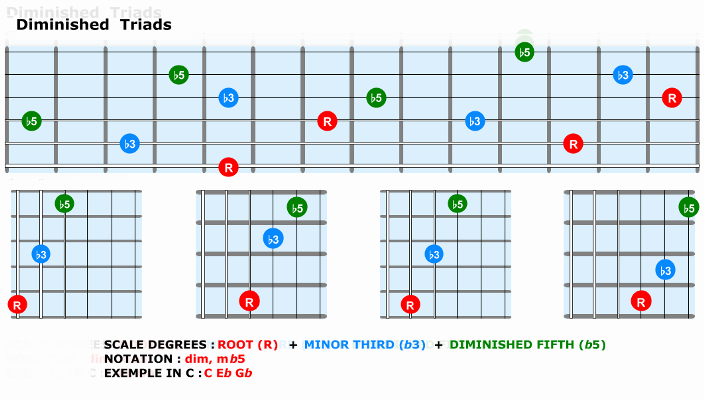 In this lesson, you’ll learn how to round out your major scale with different diminished triads. Sounds like one of the chords in a minor jazz scale. These chords sound good when they’re used as passing notes during transitions.

A triad is a section of 3rds, each measure a 3rd apart. The diminished triad is made up of 2 minor thirds.

Diminished Triads on the Fretboard

Similar to major and minor triads, diminished triads can be mapped to the fretboard using grouping of three strings. Again, we’ll have four groupings of three using strings 1-2-3, 2-3-4, 3-4-5, 4-5-6.

On strings 1-2-3, we get the following note arrangements:

After shape 3, the shapes will repeat again starting with shape 1.

The note arrangements for strings 2, 3, and 4 are as follows:

Diminished triads up the fretboard for strings 2, 3, and 4.

The note arrangements for strings 3, 4, and 5 are as follows:

Diminished triads up the fretboard for strings 3, 4, and 5.

For strings 4, 5, and 6, diminished triads have the following note arrangements:

Before you learn and start playing diminished triad chords, it is important to understand what an inverted chord is. This is an arrangement of the musical notes that are in a chord. For example, you would play the root note on the 3rd string of the guitar and then leave out that bass note.

The chart below shows you some voicings of diminished triads that are closed.

Closed guitar chords are those where the positions, fit within the space of one octave. Four diagrams below contain 12 triad chord shapes in close position divided into 4 categories:

When you are able to play diminished triads in close position on the guitar, now it’s time to learn about open triads!

The notes of an open triad are spread over more than an octave, unlike a closed triad that has its notes included in one octave.

You can drop the middle voice (so the second voice) down an octave. That’s why open triads are also commonly called “drop 2 triads.”

For a better understanding, let’s take an example with a A diminished triad. This type of triad is made up of a root (1), a minor third (b3) and a diminished fifth (b5). So there are three notes here: B, D, and F. When stacked together, the root note represents a B diminished closed voicing.

Drop the minor third up an octave, creating a new voicing B, F and D.

You can also mix-and-match these tones to get two other diminished voicings;

The following table shows what notes are highlighted when playing a diminished triad over a specific chord tone. To make it easier to understand, let’s consider playing the first row as an example. When playing a diminished triad starting on the #4 of a major chord, you bring out the augmented eleventh (#11), the thirteenth (13) and the root (1) of this chord. Meaning that if you play F#dim over C major your get F# (#11), A (13) and C (1).

In this lesson, we looked at diminished triads on the 7th degree of the major scale. These triads have a root, minor 3rd and diminished 5th interval. Triads are dissonant, and this makes them appealing to use as passing chords.

It can be useful to experiment with these chord shapes in your own compositions or in your jam sessions. Consider them for added flavor and spice up the music when writing progressions!

FAQ for Diminished Triads on Guitar

What are diminished triads?

How are diminished triads used on guitar?

What are the three types of diminished triads?

Which diminished triad is the most common?

The diminished triad is a musical chord that consists of the notes B-flat, D-flat, and G-flat. It is often used in jazz and blues music.

The diminished triad has been around for a long time and was originally called the “diminished seventh” by theorists from the Baroque period.

What are the two types of inversions of a diminished triad?

A diminished triad is created by taking three terms and turning them into two. The first term is taken away, the second term is added, and the third term is inverted. The result will be a new diminished triad that has one less term than the original.

The two types of inversions are:

1) adding a new term to the original triad

2) inverting an existing term from the original triad.

What is the difference between a half and whole step diminished triad?

How are diminished triads used in music?

Diminished triads are used in music as a way to create tension and release. There is a sense of instability in these triads and they make the listener feel unsettled.

Diminished triad can be seen as an unstable chord that can be used to create tension and release. It is often used in jazz, blues, and rock music.